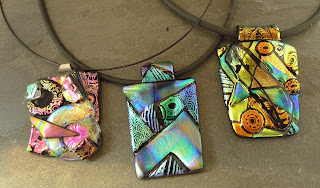 Shoot, I only have one week to get ready for the Annual El Dorado County Artists' Studio tour. One of my guests is Susie Hillard Preissneer. Her glasswork is pictured above. She makes awesome plates and beautiful jewelry.

I am working at the gallery this weekend so hopefully I can be an artist in action and be a maker there. I would like to make at least one more of my Reunion series.

Tomorrow I will post a bit of the other artists' work who will also be sharing a space in my home.

Back to the art of polymer

I am really happy to be back in the polymer saddle again. The above work was made for my 2013   High School Reunion and I wore it with pride and comfort.

A pdf on how to make the formed beads will be up on the blog and my website soon.

Hopefully I will have a form to sell in 2014 to make the process easier. At this time one needs a base form on which to build the project.

HERE is the link to my webpage with the pdf link.

Posted by Lorrene Baum-Davis at 3:00 PM No comments:

As most of you know by now, poor Mary Lennox was sent to live with her uncle Archibald Craven in the Yorkshire Moors of England. Her parents, Rose and Albert Lennox, as well as her ayah and fakir were killed by a cholera infection when it spread throughout India.  In fact everyone she knew in their English compound in Bombay were killed. Her father was stationed in the British military there. Her mother's will stated that she would go live with Archibald if the unthinkable would happen to her them. 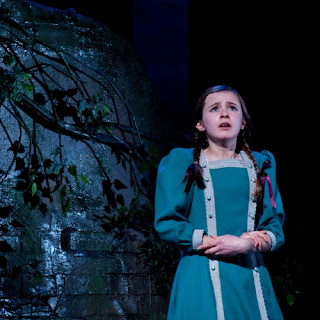 This Sixth Cholera Pandemic killed more than 800,000 people in India before it broke out in northern Africa, the Middle East, Eastern Europe and in Russia. As it's name implies, this was the sixth major outbreak of this easily transmitted disease. What we know know is that it is spread by a bacterium Vibiro Cholerae, mainly through contamination of water or food. In the developed world seafood is the usual cause, while in other parts of the earth it is found more often in water.

Did you know that if you fold an Indian sari multiple times to create a simple sieve, you can use it to strain the water? Folding them four to eight times may create a way to reduce the amount of active V.cholera in the water that was filtered.

A Seventh cholera pandemic occurred from 1961 through the 1970's and has continued, though diminished, up to recent times. In 1991 there were 570,000 reported cases.


Through this tragedy Mary changed the lives and hopes of all in Misselthwait, Archibald's English manor.

Next week: The moors of Yorkshire.

Doctor Neville Craven, Archibald's brother, is a rather complex character. Because he is the youngest of the two he did not inherit the Misselthwaite Manor in the Yorkshire moors of England.... Nor did he receive the  family wealth. He instead became a respected doctor in the area and made it his primary purpose to care for the very ill son of Archibald: Collin. He forbade Archie to even wake the child, he was "so sick ... maybe even dying".


But, Collin was not that ill.We later find that Neville had fallen in love with Lily, Archie's deceased wife and some part of his being tried to keep his brother from his son.  Archibald, as I stated in a previous blog, had scoliosis: then known as a hunchback.  Neville supposed that Collin had a more serious variety of that 'disease' and was going to die.

He has Mrs. Winthrop, the Headmistress at a school for girls come and interview Mary. He wants to get rid of her and send her away to school because he feels she is, "disturbing Collin". He tells his brother this and also accuse Archibald of "shirking his responsibilities" because he is packing to leave for Paris.  The father is destitute because he fears he cannot get away from Lily's 'ghost'.

Click on the you tube video below to watch the  performance of two talented actors singing about how young Mary Lennox has LILY'S EYES.

Christopher Higbee and  Brian Clark singing Lily's Eyes from THE SECRET GARDEN.
This is probably the finest male duet in the history of live theater

Archibald is on the left and Neville is on the right.
Sit back and enjoy!!!

The incredible roles of Martha the house maid and her brother, the mystical Dickon...

Oh, if I were only younger and someone else were to direct this show I would beg to be Martha. She has two incredible songs. And Dickon? Well he can, and has, stolen the show, many times. 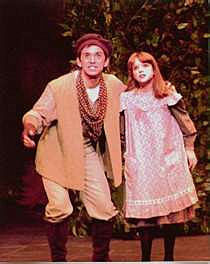 First of all, Dickon is a mystery: he is ageless, somewhat of a pied piper who talks Mary into believing she can do anything she desires....  She wants a key to the garden that used to belong to Lily... but only the Robin knows where the key is but, she must speak the bird in Yorkshire. Dickon  can be 14 years old up to 25... as I said, ageless. 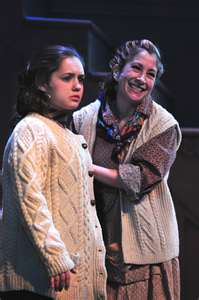 Here is Martha singing If I Had A Fine White Horse
Now Martha is a house maid with all the spunk and liveliness of one not beaten down by her station in life. She has an unending source of joy to share. She knows that Mary is saddened by having lost both her parents to the Cholera in India but also having to come and live in this dreary manor at Misselthwaite, in the Yorkshires, England.
One just knows that both of Martha and Dickon's parents were full of life, optimism and love. And that both of their children absorbed their parents joy of living and have made is their aim to share and spread this elation of living to the fullest to all they encounter.

Especially to Mary and Collin.

Labels: If I Had A Fine White Horse

Today I want to talk about the wonderful love story of Lily and Archibald Craven.
Archibald Craven was riding among the moors of Yorkshire when he happened upon the beautiful Lily working in her garden. He began to woo her and they both fell deeply in love. Eventually they married ...  against the wishes of her sister Rose, and his brother Neville. You see Archibald was a hunchback... today it is called scoliosis. Rose was terrified that any children of their union would be crippled.

That wouldn't be the only problem

Dear, sweet Lily would die during childbirth. Archibald was so bereft that he couldn't even look at his child Collin. So his brother, Neville continued to live at the manor taking care of the boy. Neville was so concerned about Collin's health that he kept him in bed and didn't allow his father to ever waken him. Archie would only read to his son after Collin went to sleep.

Lily's spirit wasn't able to leave Misselthwaite Manor for she was held there by her husbands grief and the needs of her lonely Collin. She was hoping to let Archie see that her love for him was unconditional and that he needed to share that adoration with his child. So she stayed in the manor and sang to him as well as to ease Collin's pain. 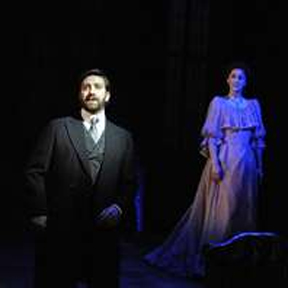 Unbeknown  to Archie and Lily, Neville was madly in love with her also. Listen to the powerful duet between the brothers in the You Tube video below.
Their duet was enough to make me want to direct this show.

Mary Lennox arrives in Yorkshire, England around 1911 after a horrific epidemic of cholera spreads through India wiping out most of the people in the compound where Mary and her family lived.  Her mother & father (Rose and Albert Lennox) and her ayah & fakir were all killed by that unforgiving disease. It was in her parent's will that Mary go and live with her Uncle Archibald Craven at Misslethwaite Manor in the moors of Yorkshire. Archibald was married to Lily, Rose's sister. While in India, Mary had no children to play with and was spoiled rotten by her ayah and fakir. They over protected her because her father was always busy with his duties as an officer in the British army and her mother was far too busy with her parties and socializing.....
.... After arriving at the manor she was scuttled off to her room where she met Martha, a sweet and caring house maid. At night the child had trouble sleeping for she kept hearing sounds of someone crying.  During her wanderings at night she happened onto her cousin Collin's room. There they met and talked and planed on seeing each other daily.  But, their plans were thwarted when Dr. Neville Craven, Archibald's brother and Mrs. Medlock , her uncles brother swore her to NEVER see Collin again... " He was too ill."

Mary was saddend to learn that Collin's mother, Lily, died in childbirth and he was not to live very long and has been bedridden since birth. Collin was just as lonely as Mary and they both had a bit of an 'attitude'.... The scene when they meet is worth the price of a ticket.
Well, you know children. It is universally understood that they will always try to get by and do whatever they WANT to do....
﻿
﻿This Wonderful musical illustrates how two lonely and ignored children bond and turn their lives around by taking charge of their own world.  The songs that they sing lift up the hearts of all who are lucky enough to sit in the audience.

Go here to watch an amazing review from the 45th Annual Tony Awards.

Go here for audition dates, times and vocal and actor needs for the roles in the production. 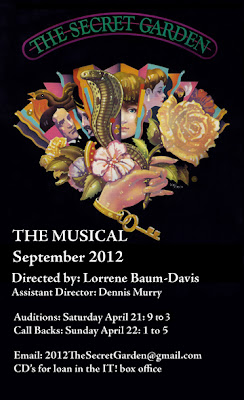 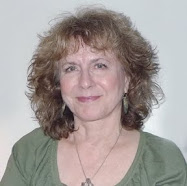 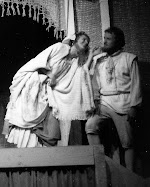 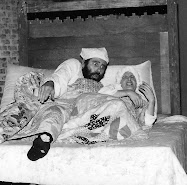 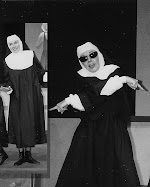